Minimize corruption and maximize prosperity with a Guarantee of One Senator per Region. They divided the Philippines into REGIONS, but kept SENATORIAL representation national with no accountability to any regions.. No wonder many regions remain poor. Petition for a regional senatorial election. All regions will have senatorial representation.
Visit

The Philippines has 42,046 barangays, 1488 municipalities, 146 cities, 81 provinces and 17 regions. It has a democratic form of government and the freedom of speech is upheld by law. English is the "lingua franca" and is the mode of instruction in all high schools, colleges and universities. Laws and contracts are written in English.

Datu Hoffer Ampatuan is a municipality in the province of Maguindanao, Philippines. According to the 2007 census, it has a population of at least 22,471 people (not counting the population of barangays only partially included).

It was created out of 9 barangays from the municipality of Shariff Aguak, and portions of 2 barangays from Datu Unsay, by virtue of Muslim Mindanao Autonomy Act No. 220, which was subsequently ratified in a plebiscite held on July 30, 2009. 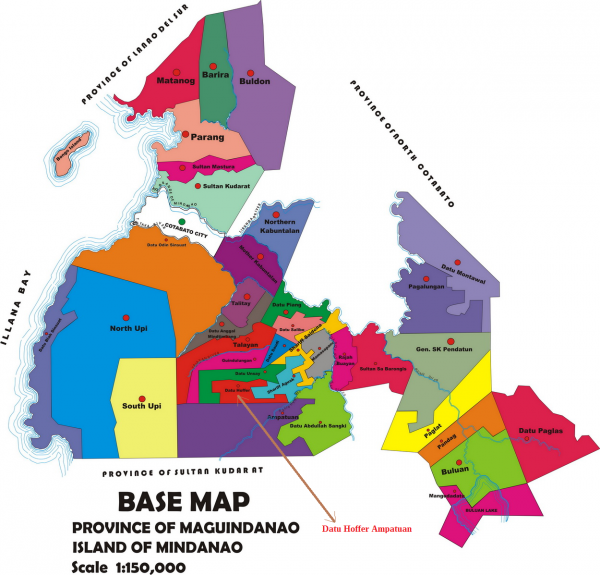 They shall exercise and perform the legislative powers and duties as provided for under Republic Act No. 7160, otherwise known as the Local Government Code of 1991. Shall consider and conduct thorough study all matters brought to their attention and consequently pass resolutions, enact ordinances and to introduce recommendations.

Budget of Municipalities and Cities: The Philippine budget formulation system is not centralized. It has been decentralized since 1991. It is the responsibility of each LGU to submit their budgetary needs for review. Failure to submit is the problem. "IMPERIAL MANILA IS A MYTH!".

In the Philippines a fiesta is usually celebrated in barrios or barangays. It is the official holiday of the LGU, the barangay. Filipinos love fiestas. It is a time for joy and celebration. A fiesta is of Spanish origin and is usually commemorated in association with a christian patron saint. Most barangays whose population have been clustered by Muslims(Moros) and their population is more than that of the Christians, the celebration of the fiesta have been cancelled and replaced with the Hari Raya or Eid al-Fitr.

DOH-Bicol commends LGUs with high vaccination rates.
LEGAZPI CITY – The Department of Health (DOH) in Bicol has commended the local government units (LGUs) with the highest performance rating during the recent National Vaccination Days drive against coronavirus disease (Covid-19). The agency said in a statement on Sunday it registered a total of 635,459 vaccinated individuals during the "Bayanihan, Bakunahan" inoculation campaign from Nov. 29 to Dec. 1 as per the Vaccination Operations Reporting System (VORS). DOH-Bicol cited the LGUs that reached more than 100 percent of their target as the city of Legazpi and the municipalities of Bagamanoc, Baras, Gigmoto, and Panganiban in Catanduanes; Cabusao, Camarines Sur; and Bulusan, Sorsogon.
→|||||←
Catanduanes eases protocols for fully vaxxed travelers
LEGAZPI CITY – The provincial government of Catanduanes has now allowed fully vaccinated travelers to enter the island province and lifted the required negative reverse transcription-polymerase chain reaction (RT-PCR), saliva, and antigen test results for coronavirus disease 2019 (Covid-19). Executive Order No. 44 issued by Catanduanes Governor Joseph Cua on Friday takes effect on Monday. It states that travelers will only need to present a vaccination card and approved S-PaSS (Safe, Swift and Smart Passage) to gain entry to the province. The EO added, however, that those partially vaccinated and unvaccinated individuals shall still be required to present a negative RT-PCR test or antigen test result dated three days prior to the date of travel.