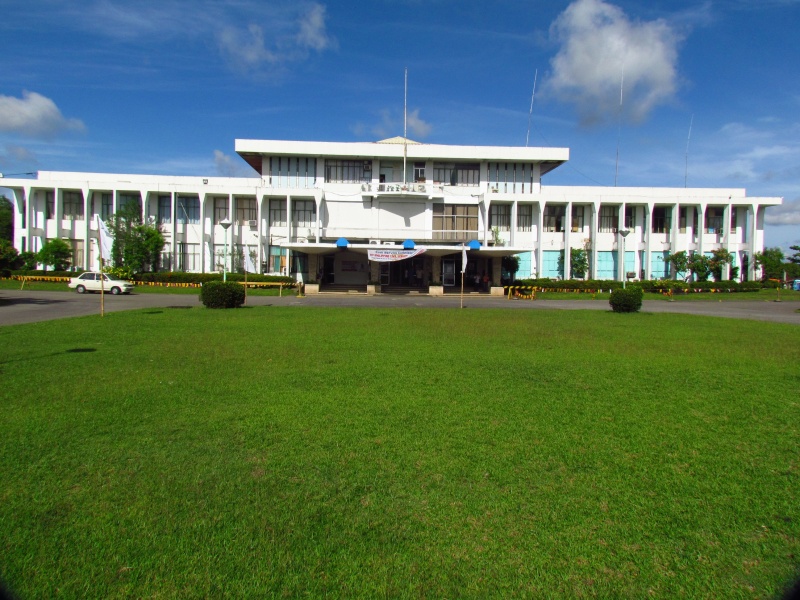 Governor Juan F. Triviño, who assumed office in 1952, initiated the first move to transfer the Provincial Capitol. The Municipality of Pili, 15 kilometers south of Naga City was the chosen ground. On June 16, 1955, Republic Act 1336, known as "An Act Transferring the Site of the Provincial Capitol of the Province of Camarines Sur from the city of Naga to the barrio of Palestina, Municipality of Pili in the same Province" was approved. However, though a 16-hectare lot had been provisionally donated by Roberto Soler, financing for the construction of the actual edifice failed to materialize. When two years lapsed without construction starting, Soler cancelled the donation as per contract.

Under the next governor, Apolonio Maleniza, another resolution was approved. Republic Act 3407 came into existence, which gave authority to the President of the Philippines to select the new Capitol site to be recommended by a committee. The committee proved to be of great help. In 1962, 3 sites were considered, namely: the Hacienda Marasigan at Brgy. San Jose, a lot within the Poblacion, and an area along the Anayan-Partido road.

The selection was left to the discretion of the president of the Philippines and by virtue of Executive Order 41 issued by then President Diosdado Macapagal on June 16, 1953, the 67-hectare Hacienda Marasigan was declared as the new site for the Provincial Capitol. In 1964, eleven years after the declaration, the groundbreaking ceremonies and laying of cornerstone were held, graced by then President Macapagal, with construction of the building starting a year later. All could have gone well but on the same year for the beginning of the construction, a case had been filed in court questioning the validity of the construction. Because of the case and the reluctance of Governor Armando Cledera to resume the Capitol construction due to lack of funds, the provincial government's objective in building the new site for Capitol was temporarily halted.

In 1968, then mayor Jose B. Velarde of Pili had the Municipal Board pass a resolution which sought the gradual transfer of all the provincial government offices to the Capital town which was already Pili. The same decree also asked for the transfer of the Capitol site from the Marasigan lot to a site within the Poblacion or at Barangay Anayan but the move consequently caused the Marasigan family to decide not to donate their lot to the provincial government.

The Capitol Site Selection Committee was then organized. Six possible sites were deliberated upon. These six included: the Marcos Stadium (now the Freedom Stadium), a 4-hectare lot fronting the Marcos Stadium, Cadang-Cadang Area, Marasigan Site, Pawili-Anayan Junction and lastly the Don Susano Rodriguez donation of a 15 hectare lot. The committee finally voted upon the last site.

It was during the term of former President Ferdinand Marcos when Executive Order 48 was issued, designating the site of the New Provincial Capitol. But before the commencement of the construction for the new Capitol site, on June 26, 1976, tragedy struck, a big fire torched the Provincial Capitol building, including important papers and public documents of the province. But also as a result, the construction of the Capitol building was hastened, a contract was signed by the Bensia Construction of Naga City, a 3-storey building with reinforced concrete, with twin RIB and corrugated galvanized iron roofing on steel and wooden roof framing came into completion. The Provincial Capitol measured 3, 528.18 square meters.

In addition, satellite buildings of the Regional Trial Court branches, Provincial Nutrition Center, the Post Office and the Kadiwa were also built.The 700-km access road from the Maharlika Highway was concreted.

The present Provincial Capitol Complex, with its impressive buildings and scenery, is considered a local tourist spot.

Source of Information: Verbatim from Wikipedia

The following 12 pages uses this file:

This file contains additional information, probably added from the digital camera or scanner used to create or digitize it. If the file has been modified from its original state, some details may not fully reflect the modified file.
Retrieved from "https://www.zamboanga.com/z/index.php?title=File:Camarines_sur_provincial_capitol.jpg&oldid=612968"
Category: