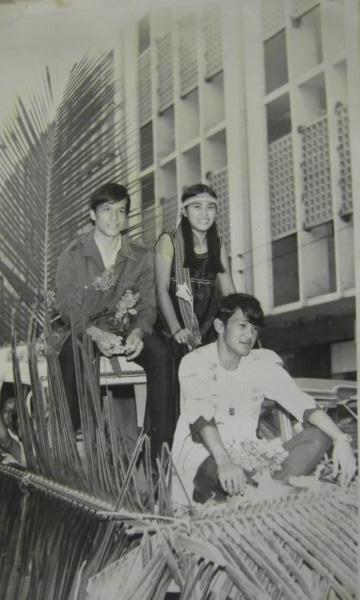 Sis Zorayda Mariano and Bro. Frank Maletsky December 5, 1970. Who is this guy sitting up front?

Now they had a friend who is of Malysian origin but enrolled at Ateneo that time. I knew him but forgot his name already. He is the guy in your picture with Sis Zorayda Mariano, sitting in front of you on the jeep that served as our float during the Ateneo Christmas Parade in December 1970. You were asking who the hell was that guy sitting in front. Well that guy is NOT an APO member and I just yanked him from the crowd in the campus so he can sit in front of you and tend to the incense burning in a brass brazier which was part of our props. Now you can understand that forlorn look on his face!

The following 6 pages uses this file:

This file contains additional information, probably added from the digital camera or scanner used to create or digitize it. If the file has been modified from its original state, some details may not fully reflect the modified file.
Retrieved from "https://www.zamboanga.com/z/index.php?title=File:Frank_zorayda12_5_1970.jpg&oldid=607342"
Categories: