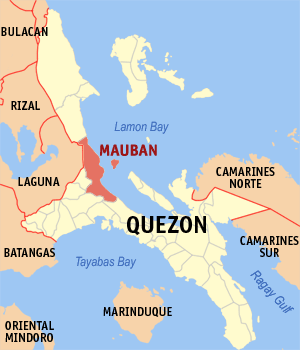 They shall exercise and perform the legislative powers and duties as provided for under Republic Act No. 7160, otherwise known as the Local Government Code of 1991. Shall consider and conduct thorough study all matters brought to their attention and consequently pass resolutions, enact ordinances and to introduce recommendations.

Budget of Municipalities and Cities: The Philippine budget formulation system is not centralized. It has been decentralized since 1991. It is the responsibility of each LGU to submit their budgetary needs for review. Failure to submit is the problem. "IMPERIAL MANILA IS A MYTH!".

Churches, Mosques, or Places of Worship in Mauban, Quezon, Philippines

The name of your school in Mauban can be listed here. You can list it like this:

You can also create a webpage for your school. We can help you.

If you have a job available and that job is within Mauban, Quezon, Philippines, you may post it here.
Remember to be as descriptive as possible and to post your Company name, Contact person, physical address, email address and Phone number.
Post expiration of Job Application. Go ahead and Click HERE to Insert your job offer in the "Jobs in Mauban, Quezon" page.

In the Philippines a fiesta is usually celebrated in barrios or barangays. It is the official holiday of the LGU, the barangay. Filipinos love fiestas. It is a time for joy and celebration. A fiesta is of Spanish origin and is usually commemorated in association with a christian patron saint. Most barangays whose population have been clustered by Muslims(Moros) and their population is more than that of the Christians, the celebration of the fiesta have been cancelled and replaced with the Hari Raya or Eid al-Fitr.

Your Story about Mauban, Quezon, Philippines

The oldest man or woman in Mauban, Quezon, Philippines

Do you know who the oldest man or woman is in your community of Mauban. Zamboanga.com is starting this inquiry in order to honor the older generation of the Philippines. Please provide the full name and date of birth of the elder living in Mauban. We will then post your entry in the Oldest Man or Woman in the Philippines page.

Featured News of The Philippine

Bacolod hotels fully booked for Masskara; P5-B revenue expected.
BACOLOD CITY – Mayor Alfredo Abelardo Benitez bared on Friday that hotels and other accommodation establishments here are already fully booked for the highlights of the Masskara Festival as he estimated PHP5 billion in revenues during the three-week festivity. “I learned that for the last week, it’s fully booked. The first and second week, 80 to 90 percent. I have asked the Department of Tourism and the head of the City Tourism Office to conduct a head count,” he said.