Contribute your knowledge about the history of Piao 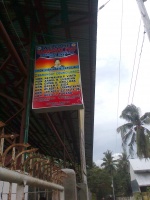 School year 2018-2019 starts Monday, Monday, June 4, 2018 and ends on Friday, April 5, 2019, for public elementary and secondary schools. The School Year shall consist of 208 school days inclusive of the five-day In-Service Training and the three days for the Parent-Teacher Conferences (PTC) conducted within the school year. However, learners are expected to be in school for a total of 200 class days.

PUBLIC NOTICE: Why pretend that the National language of the Philippines is Tagalog? It should be English. To be a Teacher, doctor, lawyer, engineer, architect, nurse, computer technician; what books do you learn from? English books of course. All your tests are in English. The constitution of the Philippines is written in English. All the laws and new laws introduced by congress are in English. For that matter, you can't be a teacher in a school system unless you know English. The "Licensure Exam for Teachers" is in ENGLISH! Who are these people forcing Tagalog down our throats? Tagalog is simply one of the many dialects of the Philippines. Keep your dialects but learn and be proficient in ENGLISH.

Do you know who the oldest man or woman is in Piao? Zamboanga.com is starting this inquiry in order to honor the older generation of the Philippines. Please provide the full name and date of birth of the elder living in Piao. We will then post your entry in the Oldest Man or Woman in the Philippines page.

Every community has its sports hero. Who is the sports hero of Piao? Are there any basketball courts, tennis courts, volleyball courts, baseball fields, softball fields, or any type of sports area or arena in Piao? Go ahead and list any upcoming sports events in Piao.

We want to give the people of Piao the ability to promote their community to the world via the internet by providing this interactive website. The growth of this website of Piao is not dependent upon one individual. This website will grow as more people of Piao participate and provide valid information about the community and also by providing pictures about the community. More power to Piao.