Contribute your knowledge about the history of Poblacion I

Total Population of Poblacion I 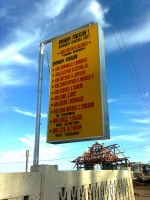 Businesses in Poblacion I

Real Estate or Properties for Sale or lease in Poblacion I, Oroquieta City, Misamis Occidental, Philippines

Fiesta date of Poblacion I

Your Story about Poblacion I, Oroquieta City, Misamis Occidental, Philippines

The oldest man or woman in Poblacion I, Oroquieta City, Misamis Occidental, Philippines

Do you know who the oldest man or woman is in Poblacion I? Zamboanga.com is starting this inquiry in order to honor the older generation of the Philippines. Please provide the full name and date of birth of the elder living in Poblacion I. We will then post your entry in the Oldest Man or Woman in the Philippines page.

Why Z-Wiki Poblacion I, Oroquieta City?