The mountain view of Tagasilay is bounded on the east by sitio Marangan of Muti, Curuan District; on the west side by Barangay Sibulao; on the north by Taguiti, which is a coastal area; and to the southern portion by Barangay Calabasa of Curuan District. It is cut across by the national highway going to the different municipalities of Zamboanga del Sur and Zamboanga del Norte.


The area is characterized by flat, rolling and mountainous terrain which is suited to coconut planting. Coconut and banana are the main source of income by farmers. They also engage in other agricultural crops such as upland rice, corn and coffee. The predominant soil type is bantog clay. In spite of wide range of vacant areas, Tagasilay is also rich of gold mines but farmers don't entertain gold tunnels because it will destroy the terrain and crops planted in the area. On the tallest mountain facing the sea, we can find RADAR which is operated by military personnel.

According to the old folks, the real name of this Barangay is Malibasag which means "strong" because of the strong water current. Even though the rain is not that heavy the water that flows through the canal is very strong.

The people of Barangay Tagasilay before used to go to a nearby barangay Taguiti, and will ride in Baroto (boat) in going to the city, because it is the only transportation they had.

Come to invest in our Barangay Tagasilay, Zamboanga City!

Churches, Mosques, or Places of Worship in Tagasilay, Zamboanga City 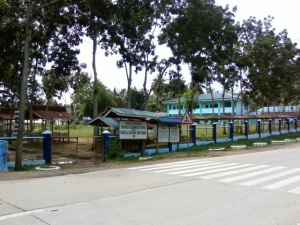 The name of your school in Tagasilay can be listed here. You can list it like this:

The schools in Mapandan are:

Tagasilay is rich in Gold.

But, farmers don't entertain gold mining because it will destroy the terrain and their crops planted in the area.

Your Story about Tagasilay, Zamboanga City

List of Families whose names are deeply rooted in Tagasilay.

Over 65K people in Central Visayas affected by Paeng.
DUMAGUETE CITY – The Department of Social Welfare and Development in Region 7 (DSWD-7) has reported that Tropical Storm Paeng affected 65,461 people or 3,561 families in 220 barangays in the four Central Visayas provinces. A report from the DSWD-7 obtained by the Philippine News Agency on Tuesday showed that as of Oct. 31, more than PHP759,000 in assistance was also handed out by the agency through their local counterparts in the aftermath of the storm. The assistance includes food packs, hot meals, modular tents, and hygiene kits, among others.

Paeng damage to W. Visayas agri sector now at P363-M
BACOLOD CITY – The onslaught of Severe Tropical Storm Paeng left an estimated damage of PHP362.934 million to crops in Western Visayas as of Tuesday. A progress report of the Department of Agriculture Region 6 (DA-6) cited by the Regional Disaster Risk Reduction and Management Council Emergency Operations Center showed the affected crops include rice, corn, and other high value-crops with a total volume of 14,002 metric tons (MT), of which more than 10,000 MT is for rice alone.

How to Upload Photos to the Photo Gallery of Tagasilay, Zamboanga City