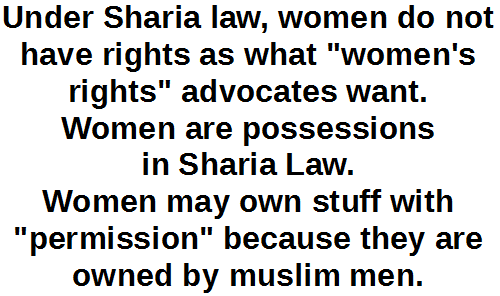 In an Islamic country where Sharia is law, women do not have rights as what "women's rights" want. Women are possessions in Sharia Law. They may own stuff with "permission" because they are owned by men.

What is the main attraction to Islam? Islam is primarily a "men's club". Women are trophies, possessions, messengers, breeders, and mostly sex slaves. To attract the men, Islam promises men the booty of conquest and the bounty of POLYGAMY. Now the big question is what attracts women to Islam? Why aren't they offended by the men who treat them only as possessions? Mohammad based his teaching on the history of women's submissive and obedient nature. He taught his followers to bully women and that they will submit and will be obedient. Mohammad was right and the rest is history. There are a few women out there who are champions of the freedom of choice. Very few.

For those women born into the religion of Islam, they have no choice. They are brainwashed to be the subject and possession of men. But how about those women who convert into the religion of Islam? Thousands of women everyday freely choose to be sex slaves and possessions of Muslim men. What prompts these women to do this? It is clearly understandable for men to convert into Islam and enjoy polygamy and be lord and master over women.

These women of "power":

A girl growing up in a Muslim family is taught from childhood to be submissive to men. It can't be denied that a few grow up to defy the authority of men over women. This, however, is a very minuscule percentage. The irony is that these few who defy the authority of men become very educated and even write books. Guess what kind of books? Books defending how Islam treats women. Without realizing it, they are still slaves of the men of Islam.