Zone IV (4), Zamboanga City, Philippines
The City Hall is within the barangay Zone IV. Most of the downtown historical places are within the borders of Zone IV.

Bordered by Zone III to the north (Gov. Lim Ave.) East bordered by: Sta. Catalina, Santa Barbara, & Rio Hondo West bordered by: Zone I, the Southside of Climaco Rd. West of the Sunken Garden is Zone I 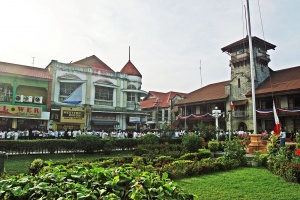 The City Hall is located within Zone IV

Barangay Zone IV was created along with other Zones within the city through Executive Order No. 06 and Presidential Decree No. 86 dated December 31, 1972. It was signed by former Mayor Hon. Joaquin F. Enriquez, Jr. on July 28, 1975.

The population of Downtown Zone !Zamboanga City has actually gone down to 3,046 as per 2010 census. Most of the real estate has been developed for retail business.

This will make zamboanga city downtown a walking business community or in other words a "walkable city".

What is a walkable city? In a walkable city there would be no need for citizens to use a car or a jeepney just to go shopping. Just walk to the supermarket and back. Walk to the mall and back. Just walk to work. No need to pay the exorbitant tricycle fairs. Walking will make the barangay citizens aware of their surroundings and any improvements that need to be done can immediately be reported to the barangay office.

As of 2016 this barangay is practically dead at night. As soon as most of the business close shop everybody gets busy looking for a way home. Home is not this barangay.

Celebrates two Feasts:
1. Fiesta Pilar - October 12. This feast is a christian feast but it does not bar or exclude other religions from its celebration. It is actually considered as the fiesta of zamboanga city.
2. Hari Raya - Strictly for Muslims

Over 65K people in Central Visayas affected by Paeng.
DUMAGUETE CITY – The Department of Social Welfare and Development in Region 7 (DSWD-7) has reported that Tropical Storm Paeng affected 65,461 people or 3,561 families in 220 barangays in the four Central Visayas provinces. A report from the DSWD-7 obtained by the Philippine News Agency on Tuesday showed that as of Oct. 31, more than PHP759,000 in assistance was also handed out by the agency through their local counterparts in the aftermath of the storm. The assistance includes food packs, hot meals, modular tents, and hygiene kits, among others.

Paeng damage to W. Visayas agri sector now at P363-M
BACOLOD CITY – The onslaught of Severe Tropical Storm Paeng left an estimated damage of PHP362.934 million to crops in Western Visayas as of Tuesday. A progress report of the Department of Agriculture Region 6 (DA-6) cited by the Regional Disaster Risk Reduction and Management Council Emergency Operations Center showed the affected crops include rice, corn, and other high value-crops with a total volume of 14,002 metric tons (MT), of which more than 10,000 MT is for rice alone.